The cooling tower technology started late and developed rapidly. At present, China cooling tower is close to the international leading level. A number of large-scale natural ventilation conventional towers, seawater cooling towers, exhaust gas cooling towers, “three-in-one” cooling towers, indirect air cooling towers, etc., which have been built to cover an area of over 10,000 m2, are being studied. 18000m2, cooling tower with a height of more than 200m.
With the adjustment of global energy development policies, high efficiency, environmental protection, energy conservation and emission reduction are the development trends of the power generation industry.

Cross flow tower
l. Water is in the packing of the tower, the water flows from top to bottom, and the air flows from the horizontal outside the tower to the tower, and the flow direction is perpendicular to a cooling tower. It is commonly used in residential areas with strict noise requirements, and is a cooling circulation tower that is used more in the air-conditioning industry. Advantages: energy saving, low water pressure, low wind resistance, low-speed motor, no dripping noise and wind noise, and easy maintenance of packing and water distribution system.
2. Multiple foundations can be constructed according to the shape of the building, and single or multiple cooling towers can be started according to the required water temperature.
3. It should be noted that the frame should have more filler volume when it is 40% more heat exchanged, the filler is easy to aging, the water distribution hole is easy to block, the anti-icing is not good, and the moisture return is large. The advantage of the crossflow tower is the disadvantage of the counterflow tower.
Unfilled cooling tower
It is installed in the upper part of the bottom of the cooling tower with a unique spray nozzle. There are two modes: spray spin without motor air supply and top tower exhaust. When the hot water is rotated through the nozzle in the nozzle, an internal swirling flow is generated to form a fine mist spray, so that the mist is present, the upward jet is flowed down, and the flow is countercurrent to the two cooling aging. Uniform atomization without hollow phenomenon, stable cooling effect, low power consumption, floating rate of 0.01%, no filler, low cost and long life, in line with GB7190.1-1997 national standard. Use range of metallurgy, food, chemical, high turbidity, high temperature, anti-corrosion cooling tower.
Enclosed cooling tower
1. Closed cooling towers are a variant and development of conventional cooling towers. It is actually a combination of an evaporative cooling tower, a cooler and a wet cooling tower. It is a horizontal evaporative cooling tower in which process fluid flows through the tubes and air flows outside the tubes without contacting each other. The water in the bottom reservoir is pumped by the circulation pump and sent to the outside of the pipe for uniform spraying. It does not come into contact with the process fluid hot water or refrigerant and the outside air, and becomes a closed cooling tower, which enhances the heat and mass transfer effect by spraying water.
2. Closed cooling towers are suitable for various cooling systems with high requirements on circulating water quality, and have application prospects in electric power, chemical, steel, food and many industrial sectors. On the other hand, compared with the air-cooled heat exchanger, the evaporative cooling tower utilizes the latent heat of vaporization of the water under the pipe to significantly enhance the heat and mass transfer on the air side, and has significant advantages.

The closed cooling tower (also called the evaporative air cooler) places the tubular heat exchanger in the tower, and the cooling effect is ensured by the heat exchange between the circulating air, the spray water and the circulating water. Because it is a closed cycle, it can ensure the water quality is not polluted, which protects the efficient operation of the main equipment and improves the service life. When the outside temperature is low, the sprinkler system can be stopped to save water. Pushing the implementation of national energy conservation and emission reduction policies and the increasing shortage of water resources, in recent years, closed cooling towers have been widely used in steel metallurgy, power electronics, mechanical processing, air conditioning systems and other industries. In winter, the temperature in the northern part of the country is usually below zero, and the problem of anti-freezing of the closed cooling tower is becoming more and more prominent. If the solution is not good, the heat exchange tube or other components of the cooling tower may be frozen. According to different process characteristics, some of the closed cooling towers operate all day in winter, some of them run in part of the time, and some are almost unused. But all need to consider the antifreeze problem.
If the closed cooling tower does not need to be operated during the winter, the spray water and internal circulating water must be drained during shutdown.
Closed cooling tower, also known as closed cooling tower, evaporative cooler.
Five, no filler spray cooling tower
Product introduction: Low noise, energy saving, water saving, stable cooling effect and low maintenance. 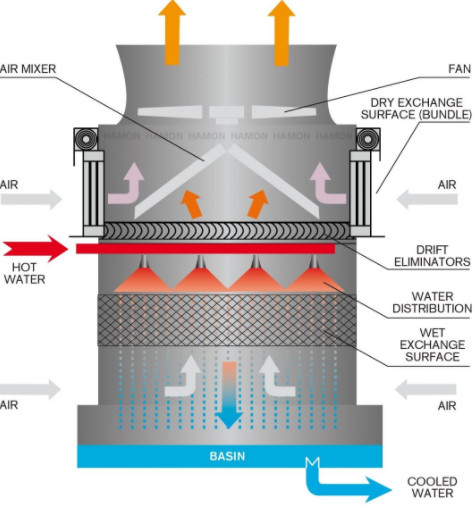